While Art Briles' off-the-field decision-making was pathetic and shameful, his on-the-field aggressiveness and risk management were second to none. He rebuilt one of college football's worst programs into an offensive juggernaut that ran through defenses at will. It also helps when you have 33 percent more downs than most teams.

Since 2011, six times have Big 12 teams gone for it on fourth down more than 30 percent of those times. Baylor owns five of those instances, according to Coug Center.

They've ranked first in the conference in fourth-down attempts five times since 2011. They were second in 2012, less than four percentage points behind West Virginia. Despite Briles' absence last year, Baylor still attempted to convert 38.7 percent of their fourth downs, by far the highest in the Big 12.

In Rhule's four seasons at Temple, the Owls never topped 25 percent, finishing with clips of 24.7, 18.3, 19.8 and 21.9 percent from 2013-16, respectively. Though he's described their offense as pro-style, balanced and versatile, he has given little indication what type of in-game decision-making he will employ.

"I'd love to have the gaudy numbers and all those things, but I just don't know if you can run 100 plays on offense and still be good on defense," Rhule said. "I haven't really found anyone that's done that. Clemson's the closest, but even Clemson, they slow it down when they have to."

Even with major offensive losses, the Bears still have the personnel to move the ball in quarterback Zach Smith, running backs Terence Williams and JaMychal Hasty and a surprisingly deep receiver group led by Chris Platt and Blake Lynch.

Click here for an incredible interactive chart of fourth-down stats for every FBS team, courtesy of Zach Murfitt at Coug Center. 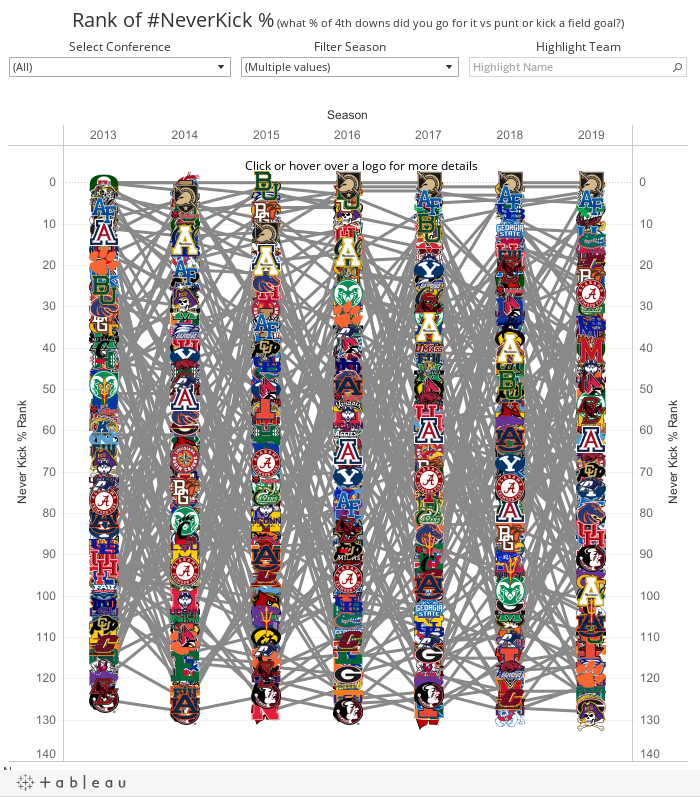